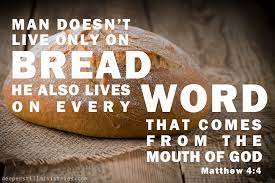 A People of true and good sense, who have intellectually gathered that knowledge which gives life, are never jaded by the sacred sciences. Indeed it is written, “Man shall not live by bread alone but by every word that proceeds from the mouth of God.” (Matthew 4:4 Deuteronomy 8:3). The Word of God is a spiritual “bread that strengthens the heart of man,” as the Book of Psalms sings (Psalm 104:15)

As I’m writing this, we are about to have our third book club session on the very book above quoted. By the time this is published, that session will most likely be available on our member ship page and through patreon. In our introduction, which was public, we got some interesting people in the chat asking questions, which we always welcome. One of them mentioned that it was actually his study of the Bible which turned him off to religion in general, albeit he later confessed that what really made him question his faith was not the Bible but a particular pastor who had sinned in a very grievous way. Nevertheless, his initial question makes this quote from St. Cyril stand out to me. How can we be people who rightly feed on the bread of life contained in Scripture, rather than allowing ourselves to corrupt it, or become jaded to its message?

First, there are those who do become jaded to Scripture, and there are unfortunately those who corrupt its teachings. For example, in our own day, there is a very large movement that is often called “The Prosperity Gospel.” This movement twists promises found in Scripture and then uses them as a way to harm people by claiming that what God really wants for you is to make you super rich, give you nice cars, and all that. These people would not say that they reject the Bible, they simply twist what it says. Another group of people arising around the same time have been making waves because of their legalistic use of Christian sexual ethics. Christian sexual ethics are good, and following them is a blessing, however, some people twist them to form a legalistic and self-righteous religion that is devoid of real healing found in Christ. Again though, when you read the books and listen to the lectures, the folks advocating for this culture would certainly never say that they oppose the Bible or its message of redemption. They twist passages that they can twist and use them to hurt people. On the other hand, there are those who read the Bible with impure thoughts, through a false interpretation, or who mean very well but have no one to teach them rightly, who through their lack of discernment of the word become jaded to its truth. For example, Sam Harris, Richard Dawkins, and others among the so-called “New Atheists” regularly quote the Bible to mock it. They generally have the same misunderstandings about the Bible that evangelical protestants do, but they weaponize their ignorance into full blown arguments against the Bible.

So, this trap does indeed exist, and there are indeed those who unfortunately fall into it. Therefore, it behooves us to learn how to be the people whom St. Cyril talks about. People of “true and good sense” who spiritually discern those things that are spiritual, and who gain from the word that which God desires us to receive from it.

The First thing we need in order to be people who can rightly feed on the bread of life is humility.

We must have the humility to listen when it turns out that the way in which we thought that a particular passage of Scripture was understood is not correct. For example, I used to think that Jesus saying, “The Son of Man is Lord of the Sabbath” was Him saying that we should keep the Sabbath in the same way in which Jews did and on the same day. I later learned that in context, Jesus is actually that exact heresy! And that instead what Jesus is saying is that His disciples were being obedient to God by being obedient to Him, and that we are called as Christians to the feast of the eighth day, the day of resurrection, the day of the Lord.

Anyway, the point is that we have to have the humility to recognize when we are wrong. We also have to have the humility to listen to instruction. That means being willing to ask our local priest questions. Even if he doesn’t have as many degrees as we do, or whatever, still being able to go to him and say, “father, I don’t know what this passage means” or, “This passage seems to me to be saying something that conflicts with Church teaching, I don’t understand.” And then having the humility to listen. That humility also means that we do not try to use the Bible as a weapon against the Church which Christ has founded. This is particularly difficult for those raised in or part of certain traditions where this use of the bible is actually seen as virtuous. While I understand why people worry that they may get taken advantage of or have corrupt church leaders run amok, the fact is that it is arrogant to think that it is my job to reform the Church. We should rather be part of the Church that needs no reforming, namely, Holy Orthodoxy. It is we who need to be reformed by the Church, not the Church that is in need of reform from us, and it is the role of the Church to reform us, not the other way around. The beauty is that when we, by God’s grace, actually allow the Church to do her job and reform us, we find that the Church benefits from our work, and multitudes of souls are saved rather than lost, and healing rather than schism is produced.

The life of St. Nectarios of the Agia is a good example to us of how to live when there are corrupt Church officials, and how not to lose faith in Christ who promised that the gates of Hell would never prevail against His church, not ever, not even for a moment. That means that the Church can never be corrupt, and the corrupt people in the Church will never be the ones who have the final say. And St. Nectarios believed that even when the world around him was trying to convince him otherwise. The result, great blessing both for him and for everyone around him, all of whom were drawn to God by Him and the Church was made better along with the world because St. Nectarios did not try to impose some selfish will upon the Church, nor did he try to reshape her in his own image, he allowed the church to reform him, he never saught to reform her, and instead of causing division, he caused the salvation of many souls, and the Church was richly blessed by Him, meanwhile those who were corrupt in the Church, who seemed to be getting their way for a time were ultimately defeated and found that the agenda they had set up could not defeat the Gospel of Christ our Lord.

In addition to humility, we must have patience. Patience is required because sometimes the answers to our difficulties take time. St. Mary of Egypt was so bothered by the lusts of the flesh that she would sometimes lay down in the desert for days, not even arising to eat or drink, but forcing herself to be totally still so that she would not sin. Whenever I am tempted by the lust of the flesh, I think of St. Mary of Egypt and how hard she fought. God could have zapped her and taken away her struggle, but instead He did something better, He gave her the will to keep fighting. Thus when she finally did overcome, she was not only changed in her works, but was changed from the inside-out. When young men ask me why God allows them to struggle with lust and does not take away their sinful desires for porn, or bdsm, or whatever else it may be, I always answer the same way that I answer my own heart when it rails about God not doing what is asked, “Have you fought your sin for as long as St. Mary of Egypt fought, and when you did, did you still find God untrue to His word?” I have yet to have anyone, including myself, who could honestly say that we fought as hard as St. Mary did, only to sin in the end. Any time that I have been willing even just to be made willing, God has always shown Himself mightily on my behalf. But that fight takes time, and struggle, and work. That requires patience, and repentance when we fail during the fight.

That work takes time, but it is rewarding. I guarantee you that you will be disappointed by your success in three days, but shocked by your progress in two months. This is what makes men saints.

So, we must have humility to listen to those who have gone before us, humility to hear those wiser than us, and humility to obey the Church, we must have patience to keep going and growing, and to allow God to answer our questions and quell our doubts in His own time and in His own way, and we must have repentance in our errors. If we are willing to be the type of person who displays these traits, we will find that the word of God is a sweet bread of life that transforms, and that we ourselves become one with the truths proclaimed therein, never growing cold to it, and never twisting it.

St. Tsar Nicholas the passion-bearer, pray for us